BEGINNINGS OF THE “PARK OF HAPPINESS” 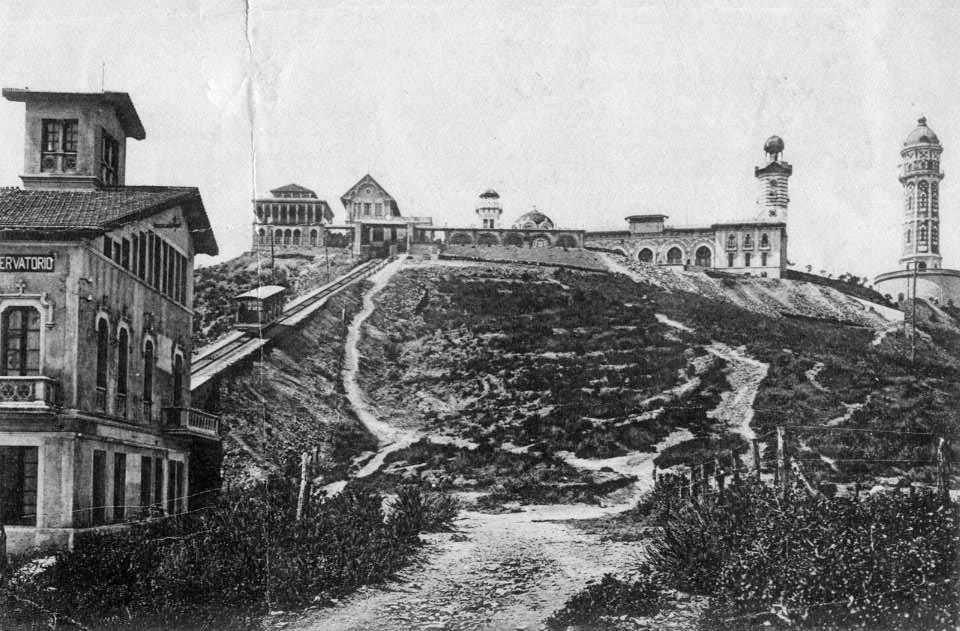 On 16 June 1900 work began on creating access to the top of Tibidabo, with the building of a tram - known popularly as the “Tramvia Blau” (Blue Tram) - and a funicular railway. At the same time, at the top of the mountain, work continued with the landscaping and construction of buildings and terraces. On 29 October 1901, the new facilities were officially opened. Interestingly, the funicular railway turned out to be the first main attraction of the Amusement Park, due to it being an innovative means of transport at that time. That same year, the first leisure facilities also appeared - such as the automatic scales and postcard vending machines.

The first decade saw the introduction of small attractions such as telescopes and binoculars, swings, the Flobert shooting gallery, bowling, mirrors, automatons, the carrier pigeon station, along with events of all kinds: including Clavé choirs, military bands, orchestras and balloon rides. New buildings were opened such as the Gran Café Restaurant Tibidabo and the Hotel Restaurant Coll as well as a large events hall, within which they tried, unsuccessfully, to open a casino.

This decade saw the definitive relaunch of Tibidabo as an amusement park. In 1910, an Electric Merry-Go-Round was installed. And in 1913 the company hired a Senegalese tribe to show off their costumes, way of life and skills. In 1915, the Aerial Railway opened, leading the way for bigger rides. And a year later a number of halls within the Park were fitted out for a themed exhibition about the First World War.

In order to get a better look at the amazing views of Barcelona from Tibidabo, a 50m high metal lookout tower was built in 1921 and named Talaia. At the same time, work began to double the capacity of the funicular railway in preparation for the 1929 International Exhibition. In 1924 access for guests of the incipient Hotel La Florida was made easier with the building of a small-gauge train that also gave passengers a beautiful run around the top of the mountain. In 1925 another African tribe was hired - this time the Fulah tribe from Equatorial Africa, and also proved extremely popular with visitors. In 1927, the first statue in remembrance of the founder Dr Salvador Andreu i Grau was unveiled. And a year later the Avió airplane ride was opened - starring a replica of the plane that made the first Barcelona-Madrid flight. By this time, the Amusement Park had become widely known, and the magazine Barcelona-Atracción had no qualms in calling Tibidabo the “eighth wonder”.

THE AMUSEMENT PARK AND THE WAR 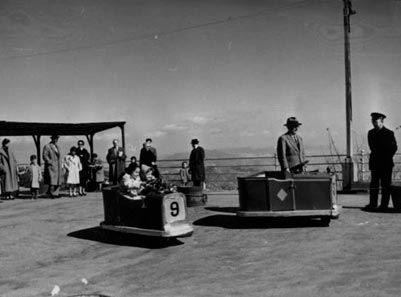 During this increasingly difficult time leading up to events of 1936 and the consequent dictatorship, the Amusement Park tried offering new smaller activities, such as Miniature Golf and electric cars. The outbreak of war meant that the Amusement Park came under collective control and suffered some damage although generally nothing too serious.

RENAISSANCE OF THE AMUSEMENT PARK

In the post-war years El Tibidabo Limited was set up again, headed up by Dr Andreu’s family, who set about extending the Amusement Park, landscaping the gardens and creating new attractions. During this period the Gran Café Restaurant Tibidabo was restored, and Hotel Coll became known as "La Masia". In 1947 summer festivals were held with great success and a year later in 1948 the Cypress Tree Maze was opened - the first new feature since the Civil War. 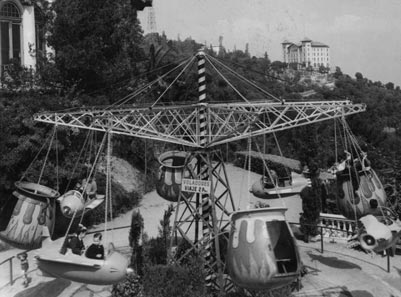 In 1951 the Children's Theatre was opened. Although it only had a short life, it was considered one of the best in Europe. At the same time, the expansion and landscaping of the lower part of the Park continued. The Amusement Park went through a golden age and saw significant improvements, including a complete overhaul of the old funicular railway in 1958. This decade also saw the setting up of a number of attractions - including the Cable Car, Flying Pots, Miniature Train (a replica of Spain's first Barcelona-Mataró railway line), Electric Cars, House of Surprises, Haunted Castle, among others. And not forgetting the 1959 opening of two major Tibidabo rides: the Talaia viewing tower and the Avió airplane ride.

The Amusement Park took on a more family feel and received the nickname "Children's Paradise". The numerous attempts to install a rollercoaster finally became reality in 1961 and new attractions appeared such as the Big Wheel, Bumper Cars, Combat Saucers, Sunflower, Coffee Game, and others. Meanwhile, indoor amusements also appeared - such as the Tontilàndia Express, the Palace of Light with its crazy mirrors, and Tibicar.

A DECADE “ON WHEELS”

In 1970, the Amusement Park was again expanded, with new terracing that made way for the Indianapolis go-kart track as well as, many years later, the Miranda restaurant. Other attractions also started to appear such as the Horse Ride, Glass House, Tralla, Mini-Motorway and Scalextric. To help alleviate parking problems, a new car park was built in 1978 to hold up to 500 cars. And in 1979, Blue Tram number 4 was turned into a souvenir shop at the main entrance to the Park and the first mascot was introduced - a friendly witch called "Pirula". 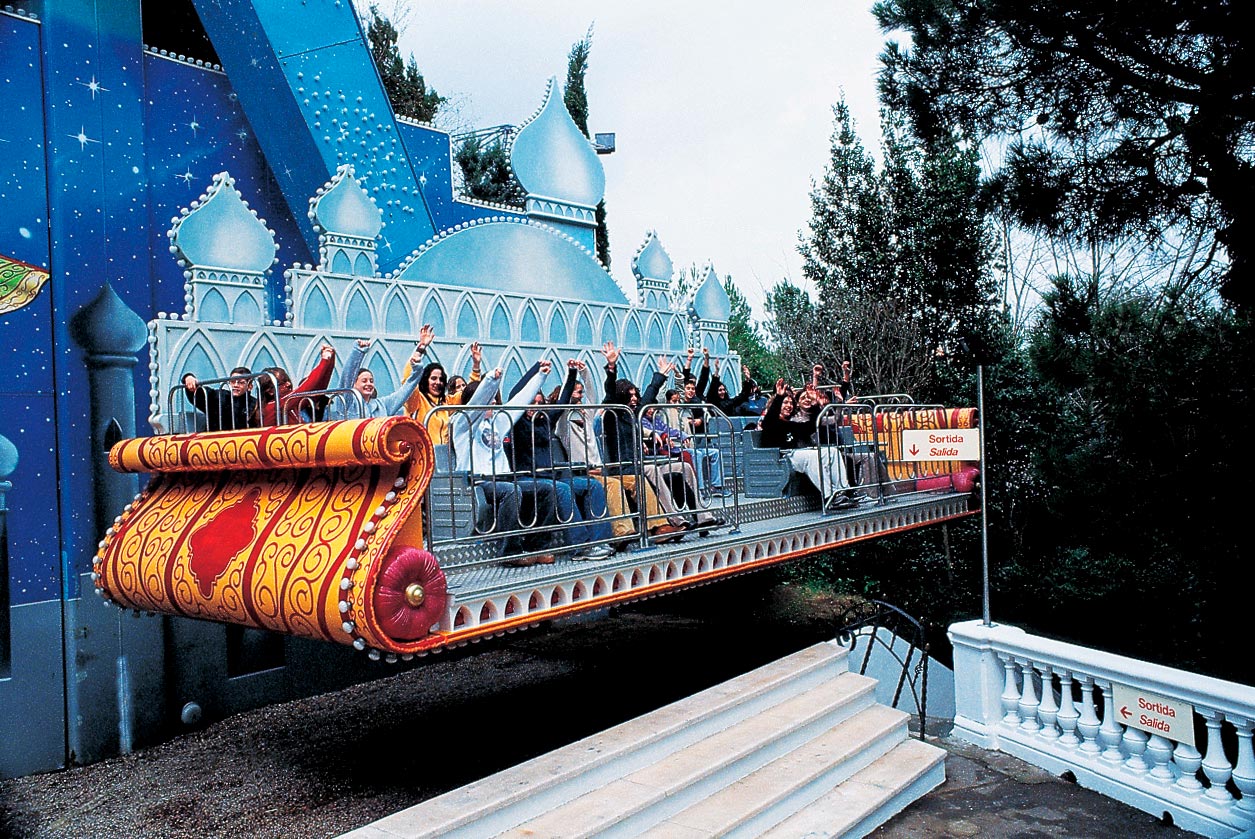 This decade became known for the modernisation of the facilities and continuous improvements. Many new attractions were added - such as the Superslide, Trans-Mobile Drag Lift, 180º Cinema, Sínia Big Wheel, Super Bumper Boats, Tibi-Trains, Trampolines, Billagolf, Setidabo, Space Ship, Twister and MotoSchoppers among others. This decade also saw exciting acrobatic shows, the creation of the Automaton Museum and an exhibition of poisonous snakes. In 1986 a fence was put around the Amusement Park and an entrance fee was charged at the gate for the first time, in readiness for a major revamp which began when businessman Javier de la Rosa bought the Amusement Park before later setting up the “Grand Tibidabo” holding company. A year later, there was a general overhaul of the Amusement Park with some attractions being removed and new ones being added. And in 1989 a new Tibidabo with the additional name "Magic Mountain" was opened featuring new star attractions Diavolo, Piratta, a two-tier Merry-Go-Round and Aladdin.

The Amusement Park also improved its restaurant facilities and continued to increase the number of attractions: Tibidabo Express, Alaska, Mystery Castle, Aeromagic (previously known as Aerial Railway), Little Boats, Hurricane, Gold Mine and so on. New features included shows Marionetarium and Horror Walk (now called Hotel Krüeger), annual festivals like "Summer Without Borders", "Song of Peace", and two new mascots: Tibi and Dabo. Despite all this, at the end of the 90s the company went through a lengthy financial and management crisis which put the future of the Amusement Park at risk, and even meant that it had to be kept closed during certain times of the year. The situation became unsustainable and the company finally went bankrupt in 1999, which ironically marked the centenary of the opening of the Park. 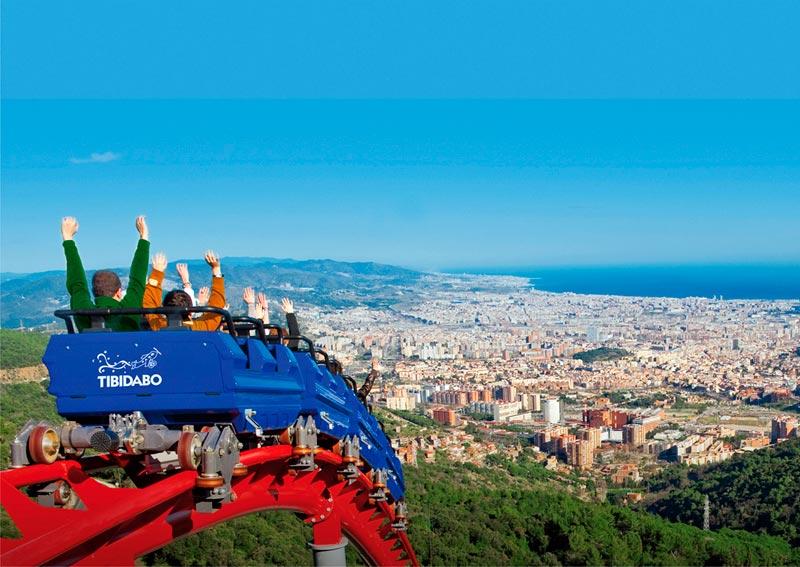 On 27 January 2000, the TGSS (general treasury for social security) seized certain plots of land, buildings and facilities of the Company, by means of public auction. On 11 February 2000, the TGSS exercised pre-emption rights over the auctioned property, and awarded it in its favour. On 22 February 2000, the TGSS and Barcelona City Council signed an agreement on the sale and purchase of properties executed by the Company. Despite the difficult times, five new children's rides were added to the Amusement Park. From 2002, the future of Tibidabo Amusement Park was studied and innovative, creative projects were planned for the general public. Leading on from this, in 2004 the Tibiclub pass card was created; access to the Park was substantially improved; new panoramic viewing lifts installed; and Catalonia’s first Free-Fall ride was opened. Other attractions followed such as Els Globus balloons, the Dididabo 4D cinema, and the spectacular rollercoaster, which is unique in Europe. Then in 2007, the funicular railway was renovated and the upper level of the Amusement Park was turned into a free access area and its boundary extended to Hotel La Florida. This area - now called the Panoramic Area - includes the re-instated tribute statue to Dr Andreu (which had been removed in 1996) as well as new entertainment facilities including a children's theatre, slides and the Sky Building where you can see a documentary film on the history of Tibidabo. 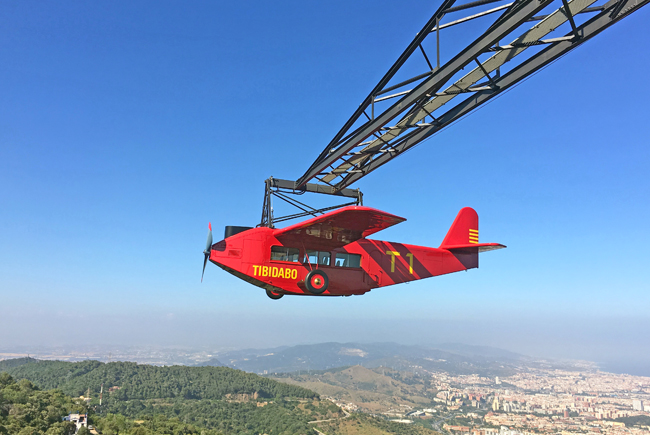 New rides and areas have also been added during this time. These include, among others, the new panoramic ferris wheel - the Giradabo - with a special basket for people with reduced mobility, Tibicity, Interactibi, Creatibi (with the Lego® Education area and the Creatibi Robotics room) and the free-to-access Interactive Water Fountains. The main square has also been refurbished, levelling the entire space to make it accessible to everyone, and there is vertical garden on the façade of the office building.

In addition, in 2015 the new Tibidabo Pets were born: Ti, Bi, Da and Bo, a bird, a lizard, a fox and a wild boar respectively, representing the values ​​and essence of the Tibidabo Amusement Park and collaborating with UNICEF Catalunya Committee in the promotion of children's rights between children and families.

Map of the Park